From Priestfield to Prestonfield

So much history abounds at Prestonfield, you feel as though you're walking into a story when you come through our doors. Before the current era as a luxury five-star hotel, Prestonfield enjoyed a distinguished position at the epicentre of Scotland's political, social, business, and artistic life.

Priestfield, as the estate was first known, was ceded in medieval times to the Cistercian monastery at Harehope in Northumberland. In 1376, after the bloody War of Independence, the Cistercians' lands were all confiscated and granted to the Earl of Carrick, son of King Robert II, who sold them to the wealthy and powerful Wardlaw family.

In the late Middle Ages, Walter Chepman, printer to King James IV and indeed the first printer in Scotland, acquired Priestfield estate. It was bequeathed to the Hamilton family who became the Earls of Haddington. By the 1660s, the estate became so burdened with debt that it was mortgaged to Sir Robert Murray. It then was sold to Sir James Dick in 1677, whose portrait still hangs at Prestonfield today. His initials also feature in the stonework and the plaster ceilings. As provost of Edinburgh, Dick initiated radical schemes such as clearing Edinburgh's streets of the excrement at his own expense - the stinking "night soil" was ferried out to enrich the Priestfield soil. When an anti-Catholic student protest escalated into the tragic burning down of Priestfield House, Sir James enlisted the king's architect Sir William Bruce to design a suitably lavish replacement. He also changed the estate's rather inflammatory name to Prestonfield.

A Dutch garden, verdant lawns and parterres with statuary and fountains surrounded the fine new Prestonfield House. Interiors were embellished with plasterwork by Italian artisans who also worked on Holyrood Palace. Tooled and gilded leather wallcoverings from Cordova in Spain, originally installed at the Dick's townhouse in the Lawnmarket, provided the décor for the principle bedchamber, now enjoyed today as the Leather Room. Other rooms were filled with tapestries and fine furnishings such as the magnificent Chinoiserie lacquer cabinets that remain at Prestonfield today. A Dutch agent purchased paintings for Sir James. Prestonfield was thus transformed into the most congenial of retreats; many of today's paintings and antiques found their place in the house of this era, over three centuries ago.

On his death in 1728, the estate passed via Sir James' daughter Lady Cunyngham to his grandson, William, who assumed the Dick baronetcy. Lady Cunyngham took up residence at Prestonfield and was at the house in 1745 when Bonnie Prince Charlie's Jacobite army settled next door at Duddingston. As Catholics, the extended Dick-Cunyngham family must have sympathised with the Jacobite cause. Sir William's younger brother, Alexander, had been befriended by the exiled Prince during travels in Italy. His mother made a handsome donation to the Jacobite war chest. Stuart connections remain at Prestonfield today; the Stuart Room features a painting of Mary Queen of Scots and looks out to the romantic ruins of Craigmillar castle. In 1746, Alexander Cunyngham inherited Prestonfield and its baronetcy from his brother and assumed the Dick surname. Sir Alexander was a physician by profession, seven times President of the Royal College of Physicians and a founding member of the Royal Society of Edinburgh. He was also interested in horticultural propagation and gained a gold medal for successfully introducing rhubarb to Scotland. Rhubarb has given a name to Prestonfield's restaurant and still features often on the menu - all grown here, naturally. 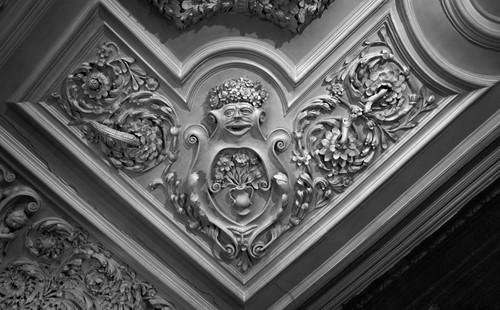 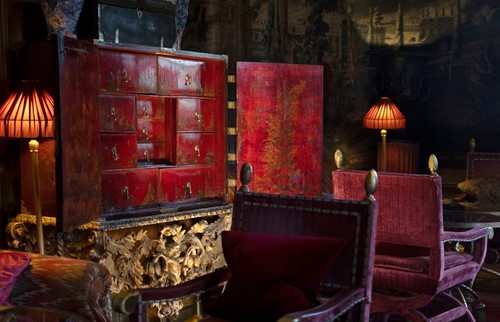 Inspired by his travels in Italy with the painter, Allan Ramsay, Sir Alexander commissioned the Norrie family to paint Italian-style landscapes on the panelling of his dining room. Re-igniting Prestonfield's reputation for genial hospitality, he played generous host to leading thinkers, writers and artists of the day including David Hume, Benjamin Franklin, Dr Samuel Johnson and his biographer, Boswell, plus Ramsay himself - whose fine portraits of Sir Alexander and his wife remain at Prestonfield. The Italian Room is available for guests today and is probably Edinburgh's most sought-after private dining room. 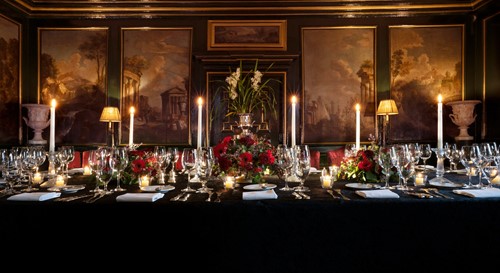 Sir Alexander's heirs continued to sustain the Dick family's flair for commerce and Prestonfield's reputation for hospitality. Sir Robert Keith Dick, who served in the East India Company for twenty years, extended and remodelled the house. He swept away the 17th century staircase to provide a processional approach to spectacular new reception rooms designed by James Gillespie Graham, which displayed portraits, and acquisitions from his travels in Europe. Originally a grand drawing room and dining room, this now forms our restaurant Rhubarb.

A neo-classical porte-cochere formed an imposing new entranceway. Ever the keen horseman, he commissioned James Gillespie Graham's splendid circular stable block and a landscaping according to the era's fashionable parkland idiom. His initials, SRKD, still feature over the stable entrance today, whilst several of his horses feature in equestrian paintings in the Whisky Room.

Subsequent generations of the family, now styling itself as Dick-Cunyngham, found distinction in military service. In the absence of its laird abroad or at the Cunyngham seat near Cheltenham, Prestonfield House was invariably leased. Thankfully, subsequent generations of Dick-Cunynghams lacked the funds to substantially alter its fibric or contents; this saved it from Victorian and Edwardian architectural remodelling.

In the 1960s, the house remembered its past reputation for hospitality and opened as a hotel. Ever since, stars have delighted in its architecture, antiques, artworks and tranquillity. Sandie Shaw walked barefoot across the marble floor of the front hall. Winston Churchill and Margaret Thatcher dined here. Sean Connery, Elton John and Catherine Zeta-Jones all partied the night away... and Oliver Reed raised the hell for which he was infamous.

Now, James Thomson, owner of Edinburgh's celebrated Witchery by the Castle, has restored the stately home. The patina of age has gently lifted from the house and its treasures, transforming the atmosphere into a new exuberance. Once more, Prestonfield is Edinburgh's most handsome hotel in the most wonderful setting - as William Burn noted over a century ago, "a picture of Arcadia". 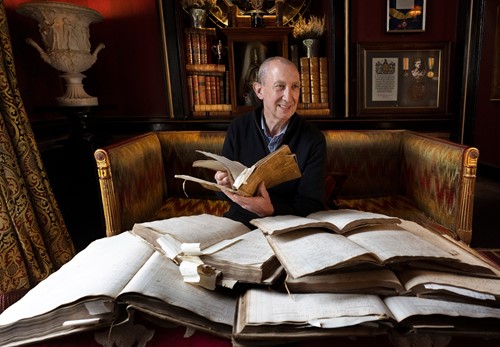