James Thomson is one of Scotland’s best-known independent restaurateurs and hoteliers.

Born and educated in Edinburgh, attending George Heriot's School, often compared to Hogwarts! It was at Heriot’s magical seventeenth-century surroundings that James saw and fell in love with the historic Old Town of Edinburgh and developed his passion for history, art and drama.

Despite his parents' initial misgivings, at the age of 12 he settled on a career in hospitality having found himself a Saturday job helping out in a restaurant kitchen before going on to study hospitality.

This lead him to set up an outside catering business at the age of 17 to cater for his friends' eighteenth birthday celebrations whilst studying hospitality.

On completion of his course he acquired a series of run-down 16th Century tenement buildings on the Castlehill in the shadow of Edinburgh Castle. In 1979, on Halloween, he launched his first restaurant The Witchery by the Castle with just three staff, he was only 20 years old and became Scotland's youngest Licensee.

The Witchery has become an integral part of the social hospitality scene in Edinburgh and is credited with revitalising the City’s neglected Old Town while James's trademark opulent and atmospheric design style, sitting alongside great food, wine and service, has garnered many awards and accolades for over five decades.

By 1989, The Witchery had acquired a worldwide profile that could no longer keep up with customer demand, so Thomson created a second restaurant, The Secret Garden, on an adjacent derelict school playground. Shortly after, he created five magical suites to complement his restaurants becoming one of the first Restaurant with Rooms in Scotland.

In 1998 James opened The Tower, Edinburgh's first rooftop restaurant. Housed within the contemporary lines of the modern Museum of Scotland, he stamped his quintessential lavish style on the restaurant and it quickly gained a worldwide reputation for great food and service. Described “as the hottest table in town” it garnered a raft of awards and accolades and became one of Edinburgh’s best loved restaurants.  It closed its doors for the final time in March 2020,  in wave of the Coronavirus pandemic after 22 years of trading and is much missed.

At school, James’s father doubted his sons ambition when he got a Report card describing his son as a “dreamer”.  James tried to pacify his father by explaining that one in four dreams do come true and in 2003 this was to happen.

At the age of five , James fell in love with Prestonfield House whilst visiting with his parents. The historic house, peacocks, Highland Cattle and parklands had left quite an impression on him and he developed a quiet resolve to own it one day. Several years later whilst studying at college, he worked at Prestonfield as a teenage waiter and in 2003, he returned as the owner.

Prestonfield was built by Sir William Bruce, Kings architect  on his completion of the Palace of Holyroodhouse in 1687 as the private residence for the Lord Provost of Edinburgh. It remained within his family until 1958 when it was passed on to close friends and became an hotel. In 2003 James was approached as the family wished to retire and leave the house in safe hands with someone who could look after it and return it to its former glory. Prestonfield has never been on the open market and James became only the third owner of the house in 333 years.

James embarked on a detailed multi-million-pound refurbishment of the historic interiors and buildings, his aspiration was to create a bold alternative to bland uniform hotels. After extensive renovation he relaunched Prestonfield and soon gained “AA Five Red Stars” and was awarded “AA Hotel of the Year for Scotland” which was described as Scotland’s most sumptuous hotel.

Within the hotel he opened, Rhubarb his most opulent restaurant to date.

James is a founding patron of Springboard UK which helps disadvantaged and unemployed people of all ages, backgrounds and walks of life to fall in love with hospitality, leisure and tourism, and gain the skills, knowledge and experience needed to flourish in a lifetime career within these industries. Springboard works with and for these industries to advocate, support and celebrate fantastic hospitality, leisure and tourism businesses and address any skill shortages.

For over 40 years he has supported students at Edinburgh College (formally Telford College) sponsoring student exchange trips for students and lecturers to Lyon and provides the James Thomson Award for Customer Excellence to hospitality students for over 20 years.

James also actively encourages young people who are not achieving their full potential through his work with The Prince’s Trust Scotland who help those facing the biggest barriers to gain success in education, work and business.  He has been a member of the Prince’s Trust Scottish Advisory Board for over 20 years and founded the annual fundraising ‘Lunch with an Old Bag’, now in its fifteen year at Prestonfield which has raised over £6 million pounds to help change the lives of young people in Scotland. He has also donated over£1 million pounds collected from the 'One pound on a bill Donation' at The Witchery and Prestonfield. 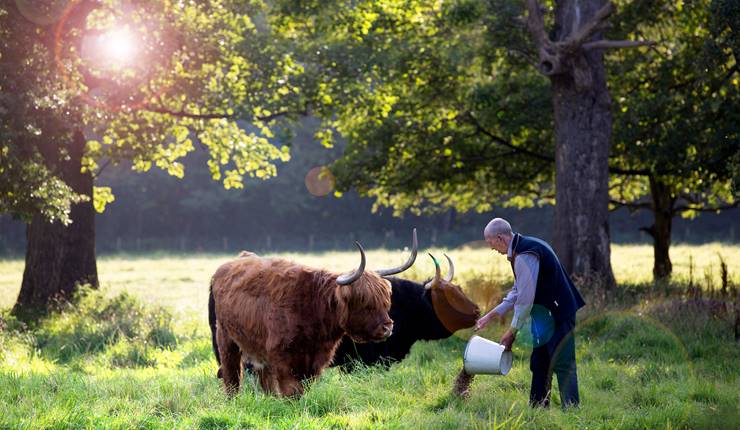